skip to main | skip to sidebar

I was thinking today, what if Apple bought FoxPro instead of Microsoft? Given there was a FoxPro for Mac version it might have been possible. I'm sure Apple would develop a "simple" way to port my code over to the iPhone without a complete rewrite. My application would also run in any OS instead of being "used as bait" to feed the Microsoft monopoly by locking my clients to Windows through .BLOAT, you know the OS api wrappers Microsoft and the cheerleaders spin as the .NET framework.

More importantly, if Apple would have bought FoxPro just think what great commericals Apple would have made to actually market FoxPro something Microsoft failed to do. Wouldn't it be cool if Apple would have followed a similar Mac vs PC format. Instead of the PC and Mac guy we had the DOT NET chick vs Ms. Fox Pro, like in the video below, I wonder which one you would perfer to take you where you want to go today?

Definately check it out!

Like everything there would be some downsides to Apple owning FoxPro, I would have to find some hobbies to occupy my free time. You know the time that I now waste writing tedious nonsensical Visual Studio "plumbing and glue code" that wasn't required in legacy technology, and working around bugs in LINQ for example when used in the middle tier

Unforunately, I snapped back to reality only to look down at the Visual Studio IDE and thought life can be a real bitch sometime!

In closing, later this week I will be releasing my next installment of Source Code Doesn't Lie: The User Interface Layer. You want to be sure to check it out!

Until then have fun and "Develop at Bloat Speed!"
.Mark
Posted by Mark Gordon at 4:02 PM

The video is great :) But hey why don't you support VB like you do FoxPro - VB isn't produced either?

There are a couple of reasons why my arguments are mostly FoxPro based.

1) "Technically" there is a VB.NET language which I have not used much. I develop in C# with Visual Studio so I'm not familiar enough with VB.NET to give, what I would feel is, an honest assessment. I will say the migration tool from Visual Basic 6.0 to VB.NET is completely worthless, I have "tried to" use it. I'm not surprised at this nor would I expect anything less from Microsoft given they don't know how to even implement a freaking class browser in Visual Studio.

2) I feel the Visual FoxPro end of life is slightly more problematic then Visual Basic. Foxpro had a rich object oriented programming model that was more robust for LAN applications then Visual Studio. FoxPro also had a data centric language which is lacking in Visual Studio.

Having said that, given the nature of Visual Studio there is a "built in" higher cost of ownership and longer development time besides being "locked into" windows by using .NET and Visual Studio compared to Visual Basic, outside of the Visual Basic language constructs. That I do focus on.

Personally I don't care what language or tool I use to develop applications as long as the tools are more productive then older technology. That is one of the million problems with Visual Studio. Visual Studio is more like a clog then a RAD tool!

Thanks for the comments and glad you like the video.

Mark, found your website on the facebook foxpro group. Interesting stuff comparing VFP & VS looking forward to more, especially the code samples they are helpful.

Have you uploaded that video to youtube? Please do. 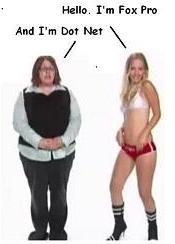 "Microsoft does not innovate. It buys, imitates, or steals. It makes things difficult for software developers, and thus eventually for users."-- Richard Brandshaft, San Jose Mercury-New

"Microsoft's biggest and most dangerous contribution to the software industry may be the degree to which it has lowered user expectations."-- Esther Schindler, OS/2 Magazine

"Saying Visual Studio 2008 is slow for application development is like saying there's a traffic jam ahead which turns out to be a 100 car pile up. " - Mark Gordon